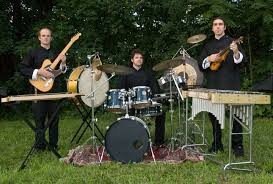 Founded in 1999 by multi-instrumentalist Brendon Wood, this flexible Boston-area band performs in a variety of different modes, including rock shows, live soundtrack music for silent films, and a “classical” concert repertoire (with an expanded lineup of local musicians recruited for specific performances) under the guise of the Devil Music Ensemble. The band lineup was fluid until 2002, when it settled into the core group of Wood, Jonah Rapino (from the New Millenium String Ensemble), and Tim Nylander (ex-Say Zuzu)